Lara Reyniers (°1998) graduated as Master of Science in Architectural Engineering at VUB in 2021. During the academic year of 2019-2020, she went on an international exchange to the Chalmers University of Technology in Gothenburg, Sweden. Her master thesis on 'Salvage and reuse of construction materials in Brussels from 1900 to 1960' investigated practices of demolition, deconstruction and reuse in the twentieth century. She further explores these topics as a PhD researcher, first funded by VUB Architectural Engineering and since November 2022 by the Research Foundation - Flanders (FWO).

Reviving the circular building industry. Looking into construction, demolition and reuse from the past to the future.

Despite many efforts, the salvage of building materials from demolition works still remains a niche activity today. However, the salvage and reuse of materials was common practice until far into the twentieth century. Therefore, this research aims to comprehend the preconditions of a flourishing circular building industry, in order to reveal opportunities and possibilities for the salvage of materials during present-day demolitions.

The Brussels’ circular building sector between 1865 and 2025 is studied to fulfil three research objectives: 1) uncover the parameters that influence circular building, 2) determine the link between these parameters and position them within larger socio-economic, political, technological and cultural trends, and 3) identify their impact on current practices. These parameters will be studied by means of case studies of ‘good practices’ that connect the various phases in the circular industry, from construction over demolition to reuse. They will be interwoven into an abstract system, that will finally be tested on contemporary demolition cases. In this way, the research offers, for the first time, a comprehensive study that covers circular practices from the nineteenth century to today, in order to identify the most effective ways to intervene in the contemporary context. As a result, the research offers a fresh perspective on one of the major challenges in the building sector.

Salvage and reuse of construction materials in Brussels from 1900 to 1960. Tracing materials sourced from demolition works for the North-South Junction 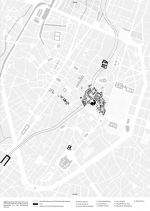 The Brussels Capital Region currently aims to take part in a shift towards a circular construction sector. However, the situation in twentieth-century Brussels offers a mostly undiscovered perspective on the topic. The construction of the North-South Junction (1903-1958) was one of the major urban renewal projects in the heart of the city. The construction demanded large-scale demolition works but also indicated a period with great potential for the reuse sector. By means of eight cases the flow of materials salvaged from demolished buildings is explored in this research, revealing a sophisticated reuse sector.

Different overlapping actors took part in the reuse process of construction materials and building parts. Until far into the twentieth century, the city of Brussels sold buildings to be demolished to demolition contractors, who paid for the old materials. Contractors precisely dismantled constructions and sold the second-hand materials at the demolition site or at their depots. Occasionally, the city of Brussels took possession of old materials, stored, and sold these from their own depot. Other involved actors were antiquarians, architects, second-hand traders, bailiffs, and the Comité d’Etudes du Vieux Bruxelles. However, evolutions throughout the twentieth century, such as a changing mindset and the appearance of new demolition techniques, gradually ended the reuse practices in Brussels.

This research concludes that the reuse of construction materials could be self-evident in the twentieth century because different actors with their own place and infrastructure in the city collaborated. Highly important in this process was the group of demolition contractors that arose at the end of the nineteenth century in Brussels. However, their profession was forced to change by evolutions during the twentieth century.