Leen Lauriks graduated as Master in Architectural Engineering at VUB in 2007. She started to work at the department of Architectural Engineering at VUB in October 2007. In 2008 she was granted IWT research funding. In 2012 she defended her PhD Contribution of the glass cladding to the overall structural behaviour of 19th-century iron and glass roofs. The PhD was prepared as joint PhD at VUB and UGent under the supervision of prof. Ine Wouters and prof. Jan Belis. 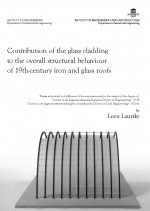 In the 19th-century architecture, the use of iron and glass roofs made it possible to bring light to the core of buildings. Together with the social context of the Industrial Revolution and the improvements in heating techniques, the creation of a “Garden of Eden” became popular. Building typologies like railway stations, market halls, fabrication halls, exhibition halls and greenhouses exploited this possibility at full extend.

When renovating the 19th-century iron and glass roofs, both the heritage value and modern standards on safety and structural performance have to be taken into account.

A first part of the research, which is based on literature study, goes into the construction history of iron and glass roofs to define the heritage value of the roof (and its components) to be restored.

The second part puts forward a methodology to recalculate the performance of the original structure by taking into account iron and glass. Lab tests were performed to deliver data that was still missing to do so. Tests on historic adhesives, namely putty, were carried out. And modern adhesives were applied on elements that show effects of deterioration, present in renovation projects.

Finally, a parameter study was carried out to determine the effect of renovation options which are applied nowadays: replacing historic putty by modern adhesives, replacing single glass by laminated glass, etc. Simulations showed that taking in account the original single glass panels in a calculation (even when connected with putty), has a positive impact on the overall behaviour.