Ir. arch. Marianne De Fossé obtained the degree of Master of Sciences in Architectural Engineering at the VUB in 2014. She started her PhD research under the supervision of prof. dr. ir. arch. Ine Wouters (VUB), prof. dr. Inge Bertels (VUB) and prof. dr. Linda Van Santvoort (UGent) in November 2014. Prof. dr. ir. arch. Ine Wouters and prof. dr. Inge Bertels received a project grant from the Fonds Wetenschappelijk Onderzoek (FWO) for 4 years on which she worked. In November 2018, she successfully defended her PhD dissertation Understanding the architecture and technology of historical urban warehouses in Antwerp, Brussels and Ghent.

During these 4 years, she presented her research on multiple occasions for an international audience. In 2015, the research was presented during the "XVIth International TICCIH congress (International Committee for the Conservation of Industrial Heritage)" in Lile, France. In 2016, she presented her warehouse research during the "Third Annual Conference of the Construction History Society" in Cambridge, United Kingdom; the "17th International Planning History Society Conference (IPHS)" in Delft, the Netherlands; the doctoral seminar "Historic Warehouses Today" in Delft, the Netherlands; the doctoral seminary "Onderzoek naar de Historische Stad en GIS" in Leuven, Belgium; and the "Cycles de conferences de BruxellesFabriques" in Molenbeek, Belgium. In 2017, she gave presentations during the "Fourth Annual Conference of the Construction History Society" in Cambridge, the United Kingdom; and the "Troisième Congrès Francophone d'Histoire de la Construction" in Nantes, France, and in 2017 during the "Sixth International Congress on Costruction History (6ICCH)" in Brussels. In 2018, she presented at the seminary "Histoire de la construction : Construire pour stocker" in Paris, France. Furthermore, through several publications in national journals, lectures and guided tours, she presented her research, the developed knowledge on historical urban warehouses and their importance to the larger public.

Preserving historical urban warehouses by understanding their architecture and technology2014-2018

Preserving historical urban warehouses in Ghent, Brussels and Antwerp by understanding their architecture and technology. 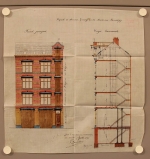 Historical urban warehouses represent a significant chapter of port cities’ economic and industrial history. As functional, rational and ubiquity building typology, they are a rich and relevant research subject for typological, urban, social, architectural and structural analyses. Today, most warehouses have lost their original storage function and since they occupy valuable plots in the city centres, they are continuingly being threatened by the speed and intensity with which the urban space is being redeveloped under pressure of the growing population. Despite their historic importance as part of the industrial heritage of the port cities, this building typology was for a long time unappreciated and ignored, as the knowledge on warehouses was limited and an overall study to fully understand their historic significance and character-defining features was missing.

To bridge this gap and to acquire a profound knowledge of warehouses, the rich variety of nineteenth- and early-twentieth-centuries warehouses in three main Belgian port cities was studied. This doctoral dissertation introduces a comparative analysis of the existent and demolished warehouses in Antwerp, Brussels and Ghent through a systematical approach on three levels: the city, neighbourhood and building level. This allows to analyse level-overarching phenomenons, such as the influence of the stored goods, of the local, national and international trade networks and of the transportation facilities on the characteristics of the warehouses. Moreover, the defining of several warehouse types based on the stored goods proves essential to understand warehouses’ character-defining features, since storage requirements of goods and specificities of their trade had an impact on the location, embedment in the urban fabric, organisation, architecture, load-bearing structure and materialisation of warehouses. The developed knowledge aims to enhance the preservation and adaptive reuse of this robust but vulnerable industrial heritage for future generations, and shows that the reconversion of each warehouse demands a unique approach.

In Brussels, where the rivers were polluted, for many centuries drinking beer was safer than drinking water. For that reason, beer brewing was an important commercial activity and many beer warehouses were needed to store the beer. The Brussels beer warehouses find their origin in the center of Brussels and spread to the agglomerations in the 19th century. They reached a peak at the turn of the century, after which they were involved in a concentration process and finally disappeared.

Now that the population increase in Brussels is causing demand for homes and work space to rise, real estate developers are casting their eyes on the large industrial sites in the city. As a result of this the existence of historic beer warehouses is being threatened. In order to support owners, designers, real estate developers and governmental bodies in the respectful repurposing of this heritage a study of these buildings is therefore urgently required. Some one hundred beer warehouses were discovered, of which sixty still exist today.

This master thesis at the Vrije Universiteit Brussels focused on the development of knowledge about the history, structure, operation and architecture of these urban beer warehouses and their integration in the urban fabric, to support their preservation and respectful adaptive reuse. It contains the results of in-depth archival and on-site investigations of nineteenth- and twentieth-century beer warehouses in the Capital Region of Brussels. Renovation projects were found that preserve the features of beer warehouses and are inspiring examples of good reconversion principles.

At the hand of one case study, the feasibility of a reuse project of an existing warehouse site was analyzed. For the latter, the historical Brewery Atlas in Anderlecht was chosen. This was part of a separate design project.