Matthijs Degraeve (1992) is a postdoctoral researcher at the Departments of Architectural Engineering and History (HOST - Historical Research into Urban Transformation Processes) at the Vrije Universiteit Brussel (VUB). In 2022, he was awarded a postdoctoral fellowship by FWO for a 3-years research project 'Plumbing the City. The regulation of sanitary installers in urban Europe (1850-1940)' under the supervision of Prof. Wouter Ryckbosch and Prof. Ine Wouters.

He obtained a Master of Arts in History at the University of Ghent in 2014, a master’s degree in the Conservation of Monuments and Sites at the University of Antwerp in 2016. In 2017-21 Matthijs worked as a doctoral researcher at VUB on the interdisciplinary research project 'Building Brussels. Brussels city builders and the production of space, 1794-2015' (ARCH, HOST and Cosmopolis). In August 2021, Matthijs defended his PhD in History "Building Brussels. Construction Entrepreneurs in a Transforming Urban Space (1830-1970)" under the supervision of dr. Heidi Deneweth (HOST),  prof. Stephanie Van de Voorde (ae-lab) and prof. Inge Bertels (UAntwerpen).

Plumbing The City. The regulation of sanitary installers in urban Europe (1850-1940).

Plumbing The City is a FWO-funded postdoctoral research project (2022-2025) that examines the contribution of governments and businesses to the transformation of private sanitary conditions in 19th and early 20th-century urban Europe. The research focuses on how government regulation of urban sanitary conditions affected the installation of modern sanitary conveniences in private housing, such as bathrooms and water-closets. Could governments impact the work of the city’s plumbers, their business organisation and know-how, in order to create healthier urban environments? The research compares London, Paris and Brussels, three nearby capital cities where modern sanitary comforts were introduced in an early stage. 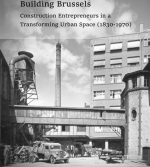 Entrepreneurs in the construction sector played a crucial role in the production and maintenance of urban space. Yet, there is still an outspoken need for in-depth knowledge of the long-term evolution of construction entrepreneurs and their relationship with that transforming urban space. In my PhD, I therefore mapped out the evolution of the Brussels construction sector (1830-1970) in terms of its presence in the urban economy and space, its structure in various building trades, and its organisation in diverse forms of business and entrepreneurship. Because few direct sources are preserved on construction enterprises, I used indirect sources of trade directories and fiscal registers to compile a database of approximately 25,000 construction enterprises, active in 1833, 1866, 1899, 1932 and 1965, supplemented with case studies via interviews and company archives.

This led to new insights that showed that industrialisation resulted in economies of scale and increasing market concentration, but at the same time, flexible specialisation proliferated as an alternative mode of production that enabled smaller enterprises to adapt to the volatile and variable market conditions in construction. These opposites resulted in a major inequality between construction entrepreneurs, with a great deal of proprietors of small-scale, volatile and transient businesses on the one hand, as opposed to a small but growing number of larger-scale, incorporated companies on the other. It also affected their position in the urban space. The limited spatial needs of most enterprises facilitated their locational flexibility and local embeddedness in the city. They were highly susceptible to gentrification processes, however, resulting in their gradual displacement from the city centre from the late nineteenth century. By considering them in a broader perspective as ‘city-nurturing’ actors, these findings contribute to our knowledge of how a significant branch of the local urban economy adapted to long-term urban transformation processes.